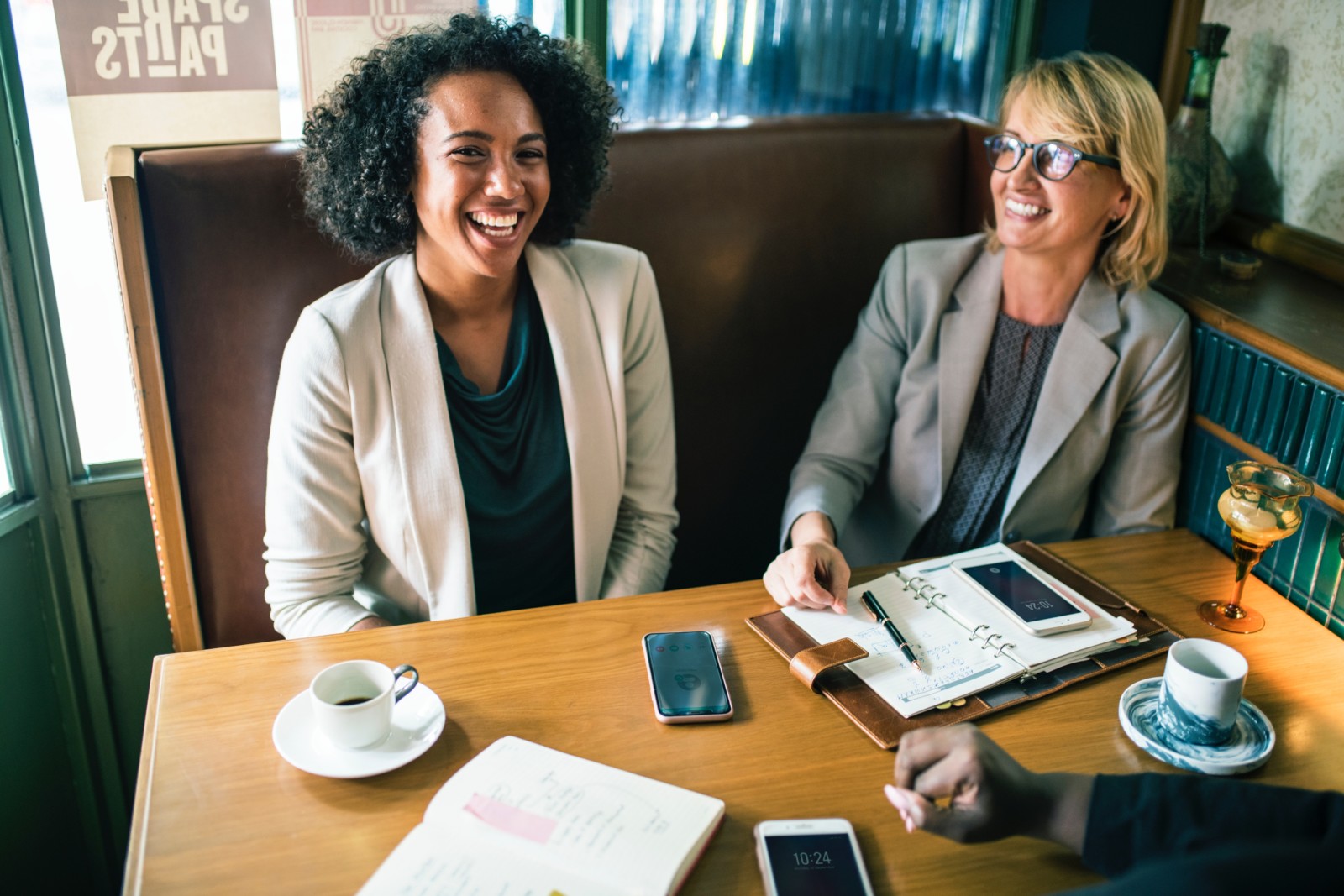 Ever seen a list like this? It starts out with a promise: Women, you’re getting in your own way at work, but we can help you. Just avoid the following behaviors:

Don’t phrase your opinion as a question.

Don’t cross your legs when sitting — or standing.

Don’t let others take credit for your work or ideas.

Don’t give too much credit to your team.

One quick Google search of the phrase “ways women undermine themselves” will give you dozens of lists like the above, but try searching “ways men undermine themselves as leaders” and you’ll find one article. Apparently the biggest mistake a man can make is to tie a tie sloppily and break basic office etiquette rules. Master those common courtesies, and he’s good to go.

According to our culture, women are broken. The reason women don’t advance in leadership is because we sabotage our own careers with our feminine traits, behaviors, and priorities. If women would just be more [insert trait here] or less [insert trait here], then everything would be fine.

But the world applies a vicious double standard to women. As soon as a woman follows the advice in these self-help guides – implementing the traditional “male” behaviors – she runs into new problems. Her peers label her “abrasive” “bossy” and “bitchy.” A study of performance reviews showed that 71% of women received negative feedback while only 2% of men did. The reverse is true as well, only 23% of women received constructive feedback, while 81% of men did. The feedback men received focused on suggestions for further professional development, while women included harsh personality criticism mostly on her style.

Yet, when we look closer at that list of “Don’t Do This” in the articles, we see that women are being told to avoid the exact behaviors that define quality leadership. Either it’s a twisted plot to distract women from doing exactly what they should do to succeed, or we have a broken understanding of what makes a good leader.

I think it’s a little bit of both.

When we study leadership with academic rigor, we see over and over that women make just as capable leaders, and often are perceived to be better leaders across the board.

In 2012, the Harvard Business Review examined more than 7,000 360-degree performance reviews of leaders at all levels. They found that “at all levels, women are rated higher in fully 12 of the 16 competencies that go into outstanding leadership. And two of the traits where women outscored men to the highest degree — taking initiative and driving for results — have long been thought of as particularly male strengths.”

Whether by design or not, our culture has created the perfect distraction to keep women in their place:

When a company hires vastly more men than women, or invests in more male-led companies than female-led, it reveals significant flaws in its vetting process. Infused throughout their process is the cultural tendency to perceive brilliance in men more often than in women. This harms businesses, and it harms economies. If women consistently rank higher in the crucial leadership skills every company needs, yet are consistently passed over for hiring, promotion and investment, then we are collectively shooting ourselves in the foot.

We say we want to hire or invest in the “best” talent, but our entire cultural training is preventing us from doing so. Without intervention, we are using processes that are NOT based on merit, but based on stereotypes and privilege. Our current hiring and investment processes (which have been in place for hundreds of years) give an advantage to certain people, not because they are more talented or hard working, but because they were born white and male. Let’s raise the bar by hiring  and investing in more women and asking men to step up their game.

The challenge is that these practices are so ingrained, that we don’t even realize that we are doing them. We may honestly think we are evaluating without bias, but we are deceiving ourselves. To counteract our cultural training, we have to take important and intentional steps.

Luis Von Ahn, CEO of the language learning app Duolingo, recently shared the story of how his company shifted their approach to recruiting and saw a dramatic increase in female engineering hires (from 100% male one year to 50-50 male-female the next). The story highlights three important changes most companies need to make in the way they identify brilliance. And, it shows that by taking some meaningful changes, we can create significant shifts in our organizations.

First, Duolingo stopped recruiting from universities with less than 18% of women represented in their computer science departments (to reflect or beat the national percentage). Second, they made sure a woman sat in on every interview. And third, they automated their skills assessment test so that the results couldn’t be associated with the candidate’s gender.

Let’s walk through how any company or startup ecosystem could apply these tactics.

Be clear about the skills and behaviors you need

Because we are so bought into the stereotypes about what leaders look like, we don’t do the really meaningful, reflective work to identify what skills and behaviors we need for our team. For both startups and growing companies, every hire needs to have some leaderships skills so they can contribute to building the company. It is a all -hands -on -deck situation.

This means startups need to hire for key leadership skills like:

All of which, women are recognized as especially skilled. These critical leadership skills can often be minimized or even “disappeared” in the flurry of recruiting and performance evaluations. Recruiting team members is a challenging and often emotional process. If we don’t have a clear understanding of what we are hiring for and how to recognize it in diverse candidates, then we will default to what our “gut” tells us. Those shortcut heuristics that lead us to trust and hire people who look like us or fit our biased, stereotypical ideas of leaders.

Your choices about where to recruit are important. If you aspire to hire the best talent, then you need to search far and wide. Many companies only pass out their job descriptions around their immediate networks. If you want to find the best talent, make sure your head hunter brings you an equal number of female candidates as male. Ask the men and women in your network to find other high potential women. Invest in and collaborate with organizations that grow women leaders and entrepreneurs to create a pipeline for your organization.

Put a woman in the room

Having a woman in the interview is not just about making other women feel more comfortable. It is about getting a more nuanced assessment of all candidates. Duolingo made sure to have women participate in interviews of all candidates – men and women – because women and men will make different observations about the same candidate. Women will notice different behaviors in a candidate than men will. Often, a woman can spot a candidate who is overselling their skills before a man will. A woman will recognize which candidates can work well with women and which ones can’t.

When you invite the woman in the room, give her voice credence. Ask her to be honest and don’t punish her later for doing it. She isn’t window dressing or an opportunity for you to check the diversity box. She brings a perspective that will improve the process and get you better candidates. If you don’t have enough women in your company to participate in the interviews, then bring in women from your board, strategic partners, and possibly vendors. Or, bite the bullet and pay a professional female recruiter to help.

But our cultural training leads us to celebrate men for both masculine and feminine leadership behaviors, and to punish women for being too feminine or too masculine. Research shows that identical resumes and identical investment pitches are evaluated very differently simply based on the gender of the candidate or entrepreneur.

One way to overcome these tendencies in a hiring or investment setting is to evaluate the skills of a candidate in a gender-free way. At Duolingo, this meant automating a programming test so that the manager couldn’t interpret the results through the lens of gender. Some companies review resumes without names or gender-indicating information.

By focusing on masculine traits present in male bodies, and criticizing women for everything, the world tells us to hire and invest in the wrong people. Our culture trains us to hire sub-optimal people and create sub-optimal working environments. To break that system and actually hire the best talent, we have to put new structures in place for hiring. We have to take intentional steps to rewire our judgment to truly see people’s skills, and how they could fit into a team.

If you are hiring talent or investing in companies, but cannot explain in clear and concrete way the steps you are taking to seek out women’s talent, then you are settling for less. You are choosing to settle for a less talented, innovative, collaborative, get-shit-done team.

To be crystal clear: having more women on your team and in leadership roles raises the standard; it doesn’t lower it. Taking steps to fully engage women leaders is an INVESTMENT, not an expense. And, really, there is no excuse for not making that investment.

I’ve got two final pieces of advice on this topic. For men, if you want to break out of the habits culture has ingrained into you, start with one simple assumption in all of your professional relationships. If you are engaging with a woman, assume she is smarter and more competent than you. This will balance out the scales that are tipped toward bias. Research shows men typically think they are smarter than women and overestimate their own abilities. Consciously choosing to shift your assumptions will change your whole attitude and experience. You will be better able to listen and learn and treat your female peers as equals.

And for women, when you see lists like the one at the beginning of this piece about how to stop undermining yourselves? Don’t listen to the bullshit. The world needs more of what women leaders bring, not less. Just be yourself and lead the way.

Diving deep towards transformation with our new Director of Operations