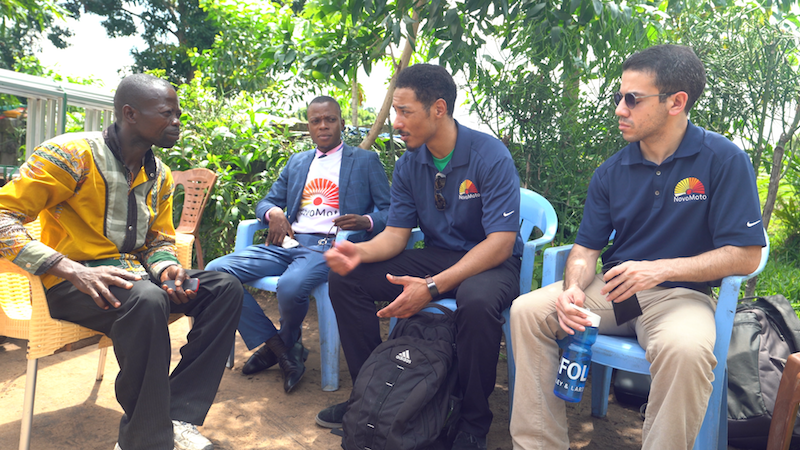 In the Spotlight: Dr. Aaron Olson, co-founder of NovoMoto

Drs. Aaron Olson and Mehrdad Arjmand are bringing rent-to-own solar electrical systems to families and businesses in rural Congo, with an ambitious plan to expand throughout sub-Saharan Africa by 2026.

More than 90 percent of the 80 million people living in the Democratic Republic of Congo do not have access to a reliable power grid. To get work done at night, to charge cell phones or to watch TV or power any other appliances, many people across sub-Saharan Africa rely on diesel generators, kerosene lamps, candles, flashlights, and charging kiosks.

When Aaron Olson was pursuing a PhD in engineering mechanics at UW-Madison in 2015, he was aware of the lack of access to reliable electricity in DR Congo because he was born in a clinic without electricity. But he moved to the U.S. with his family soon after he was born, and he had not returned to Congo as an adult.

Olson, along with fellow engineering PhD candidate Mehrdad Arjmand, took entrepreneurship as his required minor. As part of the curriculum, Olson and Arjmand partnered with some MBA students to develop a sample business plan for a new product. Their group created a business plan for selling small-scale solar kits in DR Congo with a pay-as-you-go financing model, after learning that several companies had been successful with a similar business model in other countries in East Africa.

After Olson and Arjmand both finished their PhDs, they decided to pursue the solar kit business and launched NovoMoto, a provider of rent-to-own solar electrical systems for families in DR Congo, in 2016. NovoMoto received a $50,000 investment from Doyenne in 2018 as part of the Evergreen Fund. Olson shared a peek into his entrepreneurial journey with me.

When did this switch from being a class project into a real venture?

At first, we were just looking at this as a school project. But then it became clear that this was a real opportunity. Someone was going to do this. We felt we had learned enough to put together a plan that would allow us to take advantage. I had a two-week week trip to go to Congo for the first time as an adult. I didn’t really understand what it meant to live in an area where the grid didn’t reach or to live on the grid with blackouts in the capital of the country — how crazy that can be.

For various reasons, everyone else in our group moved onto other things, but Mehrdad and I kept in touch, and by the end of 2015, we were convinced we had a plan. We incorporated in late November 2015 and started looking for funding.

What has your growth trajectory been so far, and what’s your goal for 2020?

With our crowdfunding campaign, we’ll hopefully get to 5,000 customers by the end of 2020.

How does the pay-as-you-go model work?

What’s actually going on is our batteries are activated only when customers have paid. There’s a switch that when someone has paid, they receive a code to enter into their battery pack to use it for however long they’ve paid for it.

This model is possible now because the cost of everything involved has been coming down — the solar tech, LED lighting, efficient appliances. All of those things come together to make a kit that can actually be financed at a price that a customer can afford.

Mobile payment tech — we take payments through MPesa, but that’s just one of many mobile payment apps. Instead of having to send cash collectors out, our customers can pay anytime any day, and the payment gets registered, and our server generates a code to send back for them to use their device.

You have a package that includes a TV, but not a package for a refrigerator. Does that reflect customer demand?

The TV-level systems sell faster than the entry-level. There’s just a high demand for TV. People want to be at home and watch their shows, soccer games. A lot of people pay for satellite TV who you might consider somewhat impoverished.

And diesel fuel is twice the cost there than here. It’s very expensive. Our kit, for the market group, saves them money and provides a better experience right away.

What are the biggest obstacles you have to overcome in order to meet your goal of 1 million customers by 2026?

The first challenge is getting more people and more vehicles. All of our installs happen on the back of motorcycles because we’re going into areas that are practically unreachable by a regular car.

We’re going to need to change some things about our company infrastructure—how we track payments and inventory, and a lot of administrative things will need to be revisited.

What’s a challenge that surprised you?

Right now, our technicians average about five installations per day. One of the biggest challenges for the technicians is finding where people are because there are no addresses outside of the core of downtown. To find where someone is, you need reference points. A customer might say, “Do you know that one shop? I’m two streets behind, halfway down, on the left.” That ends up costing us a lot of time. We’re going to start collecting the GPS coordinates of our customers soon in an effort to improve our efficiency.

What has been the most exciting milestone you’ve achieved so far?

When we became a revenue-generating company, that was big. Getting to over 300 installations was big. That shows some level of scalability. Also, we started a nonprofit partnership with Madison-based nonprofit Strides for Africa, which primarily does water projects. With Strides for Africa, we’ve done 25 solar installations for rural clinics. We also use those clinics as a form of marketing. We have banners and flyers in each of those clinics.

That project is very important to me because I was born in a clinic without access to electricity in Kikwit. I was born at night. All the nurse had was a kerosene lamp.

You’ve raised more than $300,000 so far on WeFunder. What’s your experience with crowdfunding been like?

We’ve had a good experience with WeFunder. They view themselves as a social impact company. They’re allowing everyday individuals to invest in companies they love, that they believe in. We’re using it to take Convertible Note investments. It’s a loan until we get a qualified financing round, then that loan becomes stock ownership of our company. Once we get a qualified financing round of $1 million or more, then everyone who has invested to date will convert into equity.

Our minimum investment is $100. I’ve had some friends who invested $100. People who I’ve never met. They believe in what we’re doing. I think that’s cool. We look forward to providing our investors a return.

Did you ever consider operating as a nonprofit?

Mehrdad and I both believe that the energy industry needs to be profitable. There are plenty of examples of profitable utilities in the world. Zola Electric has raised over $1 million. and Phoenix Intl, a company with a very similar business model, was acquired for over $100 million by a French utility.

In DR Congo, we didn’t need to be a nonprofit. And to scale faster and reach more people, doing it as a for-profit could attract the kind of dollars nonprofits don’t have access to.

How do you stay close to your customers and make sure you’re aligning your products with what they want and need?

We continuously gather survey data through our sales ambassadors.

What surprising things have you learned about your customers?

On average, what people are currently spending to power their devices and light their homes is like $18/month. But in reality, the average numbers don’t speak to the segments. There’s the person with a diesel generator for high-level appliances, down to the person who just has two flashlights. And then someone using candles. There’s a huge spectrum of what people use to provide energy to work at home, to allow their kids to study at home.

How has Doyenne supported your journey as founders?

In September 2018, we were able to leverage an opportunity to get investment from the UW Foundation by pairing that with an investment from Doyenne. It was a matching $50,000 grant, so it was either $100K or nothing. As soon as Amy heard about the opportunity to match us, she jumped on it. She immediately understood what we were trying to do, and the impact, and saw an opportunity for Doyenne to support us, not only financially, but also by providing mentorship.

Amy helped us really reevaluate and refine what we were doing. She helped us craft a new sales strategy when ours wasn’t giving us the results we needed. And she helped a lot with team-interaction related things. Doyenne and Amy have a real strong sense of how to deal with founding teams.