Lady Business Podcast S3 Ep1: All The Money For All The Women

Season 3 Episode 1: All The Money For All The Women
Category: 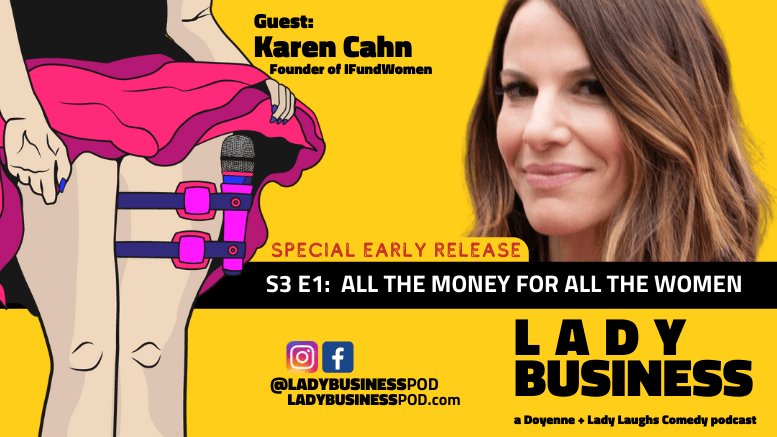 This episode is a very SPECIAL EARLY RELEASE. We recorded season 3 just a few weeks ago. All of our conversations in season 3 were around Covid-19. We wanted to release this episode early since some of the conversation revolved around time sensitive measures.

We talked to Karen Cahn from IFundWomen who is working hard to keep women owned businesses doing what they do.

Karen Cahn is the Founder & CEO of IFundWomen, a startup funding platform for women entrepreneurs. The mission of IFundWomen is to close the funding and confidence gap by providing a full-stack solution including crowdfunding, grants, expert business coaching, and a vibrant community of women business owners collaborating on how to win.

Karen is a pioneer in tech and media. She was an early Google Intrapreneur where she spent 10 years leading various monetization teams in search, display, and video. Most notably, Karen started the Branded Entertainment business at YouTube, when, back in the olden times of YouTube 2006, she and a rogue group of sales and product managers, made the connection between big consumer brands and video creators, thus creating the first native video ad experiences monetized on YouTube.

After a historic 10 year run at Google, Karen spent three years as General Manager of AOL Original Video, and was responsible for business strategy and strategic partnerships. In this role, Karen built AOL’s female creative economy in video and as a result, nabbed AOL its first-ever Emmy nod.

Karen is an active angel investor in her own right and through Golden Seeds. Karen is on the board of advisors of Girl Rising, an organization dedicated to girls education in developing countries. She is also on the Springboard Media Council and invests her “human capital” in their pipeline of high-growth, women-led companies.

Karen holds a BA from the University of Wisconsin-Madison, double majoring in African-American Studies and US History. Originally from the suburbs of Boston, Karen migrated to New York City in 1998 to be a part of the early days of the digital media revolution with Salon.com. When she’s not working, Karen can be found in her kitchen in Montclair, NJ baking Toll House cookies with her kids (because there is no substitute for Toll House), or outside doing something sporty like playing golf, yoga, tennis, tetherball, or any sport involving a ball and a bat.

LBP S3 Ep1: All The Money For All The Women